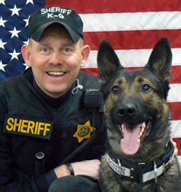 The K-9 unit is funded solely through donations from private individuals and businesses. Donations are used to maintain the unit and provide care for Ronin and Edik. The Lancaster County Sheriff’s Office welcomes citizens and businesses to participate in sustaining this worthwhile program.

To show your support, purchase the official apparel by contacting Sgt. Bolton at 717-390-7776.
Thank you for your support!

About the Unit
The Lancaster County Sheriff’s Office K-9 Unit was formed in February 1998 with Deputy Marc Lancaster appointed as the first handler, and his partner, a black lab named Kayla. Kayla retired in April 2005. The Sheriff’s Office second handler was Deputy David Bolton, and his partner, a Belgian Malinois named Cobra. Cobra retired in April 2010. 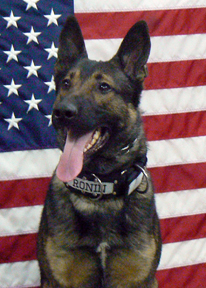 K-9 Benefits
One of Ronin and Edik's skills is explosive detection. Both dogs can detect a variety of different odors, including the odors of bomb ingredients.

Some other K-9 skills include:
Both teams train everyday. Ronin and Edik as well as their handler also train 16 hours a month with trainer Paul Price of North East Police K-9 Academy. Both teams are also certified each year through United Police and Correction K-9 Association.