Lancaster County has the most covered bridges in Pennsylvania and ranks second in the nation with nearly 30 surviving covered bridges.  Bridges historically linked farmers and communities over waters that were impassable.   Residents petitioned the courts for the construction of these wooden roofed structures while the coverings acted as weather barriers that served to extend the life of bridges well over a century.   Covered bridges reflect both history and engineering.  The sturdy arched truss bridges carried on the names of neighboring mill owners or farmers long after their descendants were gone.  In the late nineteenth century, there were well over 100 covered bridges across Lancaster County but by the mid twentieth century this number dwindled to 50. 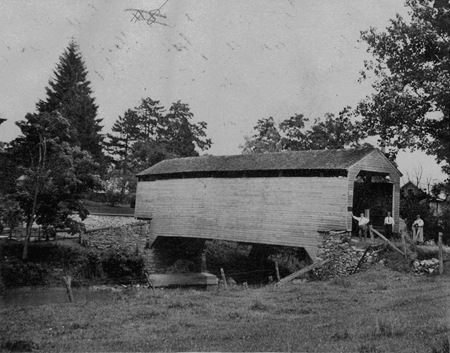 Built in 1885 at Michael Moore’s Mill between West Hempfield and Rapho Townships. This bridge sustained heavy storm damage and was swept downstream in September 2011. It was reconstructed using materials and methods consistent with the original bridge. 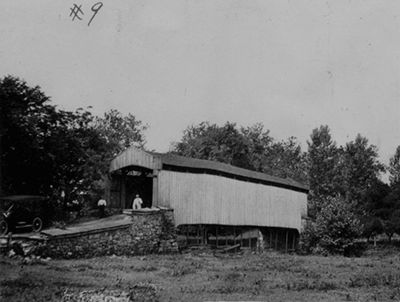 In January 1861, citizens of West Hempfield and Rapho Townships petitioned for a bridge near the public highway leading from the Marietta pike to the village of Maytown.  The petition described the “ford there being more than ordinarily deep, and being frequently rendered impassable by reason of ice, and high waters…”   County Commissioners awarded the contract for the bridge to Elias McMellen on June 14, 1869.  Perhaps the Civil War delayed bridge approval.   McMellen enlisted in the Civil War in 1861 and was wounded three times before he mustered out and returned to Lancaster in 1865 to resume bridge building.   McMellen built nearly a dozen covered bridges across Lancaster County. 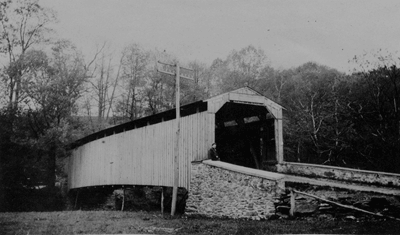 The first bridge at this location was completed in the winter of 1847 by Joseph Russell.  It was swept away in June 1858 by a storm which damaged many mill properties.   Heavy rains began on the night of June 25, 1884, and the Octoraro Creek became a roaring river higher than was ever known.  The bridge at White Rock Forge described as one of the finest bridges around was quickly swept away again.  Nearby citizens rallied to build a makeshift crossing by gathering timbers from the old bridge that were swept downstream.  They worked together and built a substantial temporary bridge for only 47 cents, the amount paid for the nails.  Elias McMellen rebuilt this bridge in the weeks that followed for $2,495.

A searchable photograph catalog of Lancaster County bridges is available at the following link: